Java ME: Java 2, Micro Edition is a group of specifications and technologies that pertain to Java on small devices. The Java ME moniker covers a wide range of devices, from pagers and mobile telephones through set-top boxes and car navigation systems. The Java ME world is divided into configurations and profiles, specifications that describe a Java environment for a specific class of device. 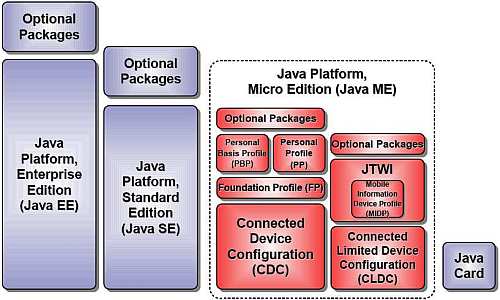 KVM:The KVM is a compact Java virtual machine (JVM) that is designed for small devices. It supports a subset of the features of the JVM. For example, the KVM does not support floating-point operations and object finalization. The CLDC specifies use of the KVM. According to folklore, the 'K' in KVM stands for kilobyte, signifying that the KVM runs in kilobytes of memory as opposed to megabytes.

The majority (about 80%) of mobile phones in the world today are feature phones. Devices of this type typically include a high-resolution screen, multiple forms of messaging (SMS, MMS, IM, Email), basic 2D and 3D gaming, a camera, music player, Internet browser, etc.

Powering all this functionality is a core set of Java ME technologies known as CLDC (the Java VM) and MIDP (the mobile information device profile). CLDC and MIDP are the most widely adopted Java ME application platforms used in mobile phones today. Layered on this base is a set of additional Java ME technologies often called “optional packages” that come in the form of JSRs (Java Specification Requests).