The execution of the CP can be conceptually divided in three logical phases (not necessarily consecutive):

Starting from the above considerations, we came up with three architectural proposals:

This model was born from the following observation:

Starting from this assumption, we can conclude that we can reverse the model, i.e. run the decision algorithm on each node in parallel and let the CP cycle between the nodes just for the purpose of updating the local views and choosing which local results must be chosen. Be aware that each local result isn’t applied blindly to the local node, but has to be validated by the CP and thus extended to the whole system or ignored. This proposal should be seen as a sort of pipeline mechanism. In the traditional approach only the node running the CP is active, while the others are idle. In this approach we can reverse the situation, making all the nodes active and using the CP to coordinate the local results. The CP can decide which solution deserves to be extended in multiple ways. For example, it can look at the differences between its updated global view and the outdated global view of the node, or looking at the difference between the proposed decision and the last confirmed orders. The underlying principle is that if a proposed solution doesn’t differ greatly from the last validated one, the CP should refuse the proposal. In this way the CP might react very fast to any critical event, while react more slowly to ordinary events that wouldn’t remarkably change the overall behavior. 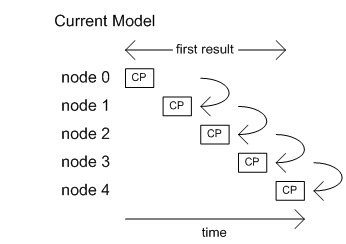 This model is similar to the current one, but it introduce the idea of critical event. When a critical event occurs, the decision algorithm is forced to restart from the beginning. Such events are supposed to be rare and particularly dangerous to the system (e.g. node near to collision) and for this reason they should be chosen very carefully. The idea is to invalidate the current ongoing "decision algorithm computation" because that computation has been triggered in an overly outdated context (one that is dramatically different from the current context). In this particular situation, the reactivity of the PIM would be slowed down by a computation that that will surely be too outdated when it will be completed. These conditions should be easily checked in the arriveOnNode(int) method, without much effort or computational overhead. The decision algorithm can be stopped in two ways:

The following pictures are an example of the reactiveness improvement that this model can bring: 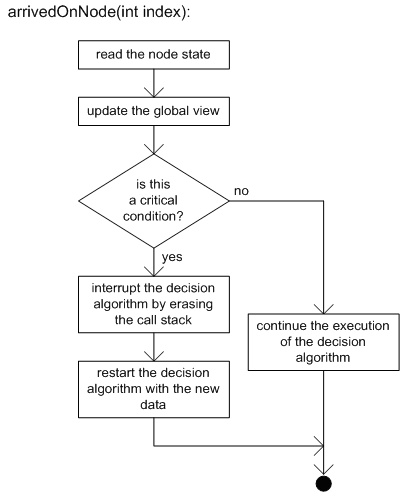 This model requires the CP programmer to adopt a new programming style, similar to real time programming. The idea is similar to a finite state machine (FSM) or to a sort of reactive model. The decision algorithm phase will have to be designed in a piecemeal fashion, i.e.

This means also abandoning the reactive migration by getting rid of the timeslice.

This way, the CP would be able to execute instantly any taken decision, in the fastest possible way. This approach is feasible only if we can write a very fast decision algorithm capable of taking decisions only for a single node, based on the view of the system and on the node state. This proposal follows the idea of bringing the decision close to the data. Two kinds of criticisms can be done to this model: